From the September 2015 PMA Brethour newsletter 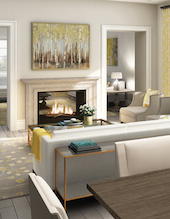 YORK REGION IS the summer’s low-rise champion, accounting for more than 30% of total GTA sales as of end of July.

Affordability and product availability drove sales in East Gwillimbury, which had 8% of total GTA low-rise transactions, more than any municipality except Brampton (27%).

While low-rise inventory across the GTA is down to 4,550 units (or about three months of inventory), Alex notes that the sale of stacked townhomes — as evidenced by many of the communities noted above — have accounted for nearly 10% of high-rise sales to date in 2015 (versus 7.8% on average between 2012 and 2014).

On the high-rise side, the summer’s big launches were Grid Condos by Centrecourt Developments at Dundas and Jarvis, where nearly all of the 528 units sold; 150 Redpath by Freed Developments and CD Developments, which saw over 150 units sell; and Connexion, a stacked townhouse project by North Star Homes at Islington and Bloor, where nearly all 148 units were snapped up.